MP3 support for Honda Accord

As you may recall, last year I installed a Dell DJ in my Honda Prelude. Well, my wife was jealous and wanted the same treatment for her Honda Accord and new Dell DJ. She actually got better treatment, as I was able to use some new tools that I discovered after the Prelude project.

The first improvement was doing away with the FM modulator. Don't get me wrong, a hard wired FM modulator is definitely a step up over the cassette adapters or FM transmitters on the market. But you are still sacrificing signal quality by going through the FM antennae input instead of a stereo's line-in. The modulator also needs to be wired up to power, and needs an accessible toggle switch to turn it on and off (although there are some models that auto-switch when they detect a signal). Shortly after I completed the Prelude install, I discovered the P.I.E HON98. It converts the proprietary CD changer input on the back of the factory radio into a standard auxillary line input -- EXACTLY what I had been looking for. Honda changed the factory stereos in the more recent cars, so I would have to find a new solution for the Accord. I was happy to find the Soundgate SNHOND3.

The second improvement was adding an LCD display for the current song. As in the Prelude, I wanted to be able to hide the DJ in the Accord's glove compartment and not have to see it or touch it. There are custom mounts available that let you put it right on your dashboard, but that would require putting it away every time you get out of the car (unless you want to invite thieves). The solution is the Dell FM tuner in-line remote. This wired remote includes an LCD display for the current song. It also has the added benefit of showing "Shutdown" when you turn off the DJ by holding the Play button on the remote (the basic in-line remote I used on the Prelude also lets you shutdown from the remote, but you cannot tell if the shutdown is working until the music stops a few seconds later).

There were a few resources that were invaluable for helping me figure out which parts I needed, and how to take apart my new car without hurting anything: the forums at AcuraZine, Richard Brigante's Accord iPod Install, and the Honda factory installation instructions available on the H & A Accessories website.

The SNHOND3 is installed in the center console, next to the drawer. The SNHOND3 plugs directly into the CD changer port on the bottom of the factory stereo. A 1/8" headphone jack to RCA adapter connects the inline remote to the SNHOND3. The inline remote is placed in the "not an ashtray" holder, with its wire running to the back of the glove compartment, where it connects to the DJ.

Everything installed, with no noticeable modifications (ok, the floormats are not factory defaults). The factory stereo is switched to CD-C mode (CD changer - or AUX input in this case) using the CD/AUX button on the dashboard. 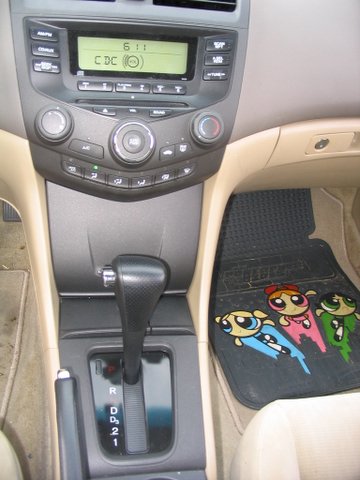 The "not an ashtray" opened to reveal the remote accessible by the driver. 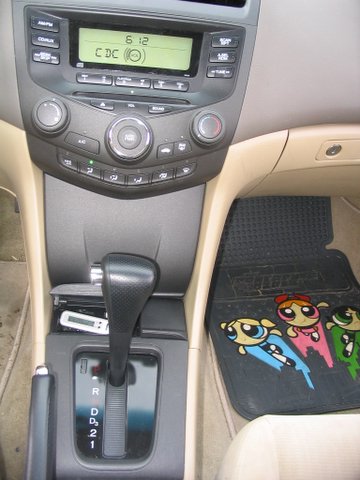 A close up of the remote, displaying the current song and available buttons (play/power, previous song, and next song) 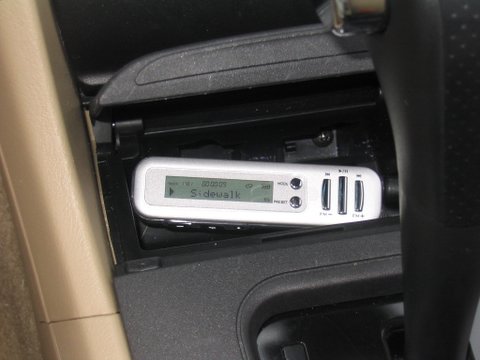 The DJ nicely tucked away in the glove compartment

The DJ has enough slack to be pulled out and controlled from the passenger seat. 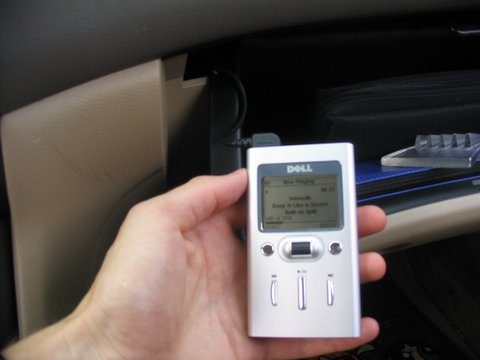